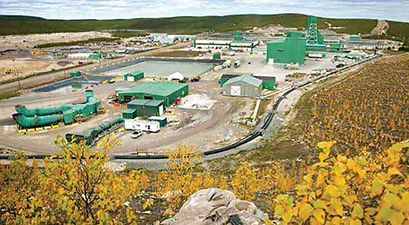 Starting in 2024, Cameco plans to produce 15 million lb/y of U3O8 from McArthur River (above) and
Key Lake.
Cameco announced that the first pounds of uranium ore from the McArthur River mine have now been milled and packaged at the Key Lake mill, marking the achievement of initial production as these facilities transition back into normal operations.

McArthur River and Key Lake are among the best and most prolific uranium assets on the planet, and after building homes for these pounds in our long-term contract portfolio, we are delighted to have them back in production, said Cameco President and CEO Tim Gitzel. Market conditions have continued to strengthen since we announced their planned restart.

Production was suspended at McArthur River and Key Lake for approximately four years beginning in January 2018 due to persistent weakness in the global uranium market. In February 2022, with a notable market improvement underway and an increase in long-term contracting activity adding significant volumes to its portfolio, Cameco announced the next phase of supply disipline, which included the planned restart of both operations.

McArthur River is expected to produce up to 2 million lb of uranium concentrate (U3O8) in 2022. Starting in 2024, Cameco plans to produce 15 million lb/y of U3O8 from these operations, 40% below their annual licensed capacity.