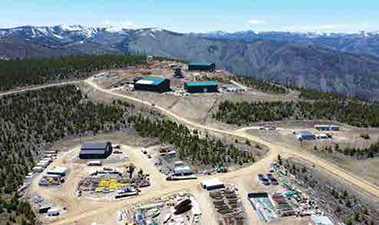 An aerial view of the ICO mine and mill near Salmon, Idaho. Jervois expects commercial
concentrate production to begin in Q4 2022.
Jervois Global Ltd. commenced the first stage of plant commissioning at its Idaho Cobalt Operations mine site (ICO), following a successful opening ceremony on Friday, October 7, 2022. With equipment undergoing final completion test work, commercial concentrate production is expected across Q4 2022. Jervois expects to achieve full nameplate capacity by the end of Q1 2023.

Ore delivery to the plant on the ICO site began during October, with multiple ore faces now available for production mining. Underground mine infrastructure including the underground fuel island, triple clarifying sumps and the main shop are nearing completion. Mine development continues with a focus on vertical development, to support additional ore production faces.

As there are no cobalt refineries in the U.S., the cobalt concentrate produced at ICO must be exported. Jervois has an option to refine ICO cobalt concentrate at its 100%-owned São Miguel Paulista (SMP) refinery in São Paulo, Brazil, and is continuing its negotiations with third-party processors in countries allied to the U.S. Jervois said it will sell copper concentrate from ICO into North American markets.

ICO became an economically viable project as cobalt prices increased, and global geopolitical perspectives evolved with governments placing increased importance on critical mineral production in their own countries or in friendly jurisdictions. As noted by dignitaries during remarks at the ICO opening ceremony, ICO will be a key contributor to U.S. national security by securing a domestic supply of cobalt, which has been designated a critical mineral by the U.S. government.

The company said it would like to further engage the U.S. Government to preserve and expand these national security benefits. Such could include potential investments into mine expansion and downstream processing, and other strategies to ensure that pricing volatility associated with a commodity supply chain controlled by China does not adversely impact the U.S. national interest.