Kamoa Copper Produces Record 29,800 MT of Copper in May 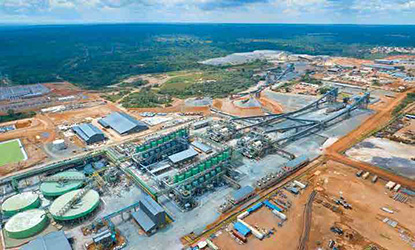 Kamoas Phase 1 and Phase 2 plants mill a record 660,000 mt of ore in May.
Kamoa Copper set a new monthly production record in May, producing 29,800 metric tons (mt) of copper in concentrate from the Kamoa Copper Mining Complex in the Democratic Republic of Congo. Kamoa Copper achieved record monthly production despite planned interruptions during the month, which included scheduled maintenance on the Phase 1 concentrator plant for two days. During the month, Kamoa Copper milled 660,000 mt of ore at an average feed grade of 5.5% copper.

The Phase 1 and Phase 2 concentrator plants are currently processing at a combined annualized rate of approximately 8 million metric tons (mt) of ore  about 9% above nameplate capacity  and are expected to ramp up to 9.2 million mt per year of ore by the second quarter of 2023. This will increase the companys annual copper production to more than 450,000 mt and will rank Kamoa Copper as the worlds fourth-largest copper producer.

Kamoa Copper successfully declared early commissioning of the Phase 2 concentrator plant on April 7, while the first ore was introduced into the Phase 2 milling circuit on March 21. First copper concentrate was produced approximately four months ahead of the originally announced development schedule and the Phase 2 plant is now consistently operating at comparable throughputs and recoveries to the Phase 1 plant.

Kamoa Copper management anticipates that the accelerated ramp-up of the Phase 2 concentrator plant positions the operation to deliver in the upper end of its 2022 copper production guidance of 290,000 mt to 340,000 mt. Together with our joint-venture partner, Zijin Mining, and alongside the Congolese nation, we have resolved to fasttrack expansions at the Kamoa Copper Mining Complex to meet rising worldwide demand for the responsibly-produced copper metal, Ivanhoe Mines Founder and Co-chairperson Robert Friedland said. Kamoa Coppers accomplishments also demonstrate the great potential and strategic importance of the Democratic Republic of Congo as we electrify the world economy, which will require a historic quantity of copper and many other vital metals. Kamoa Copper is proof that the countrys vast mineral and 2 hydropower potential can be realized to provide long-lasting economic and social benefits for the Congolese people.

Engineering and construction work for the Phase 3 expansion, including a new box cut and twin declines to access new mining areas, are progressing quickly. Phase 3 will consist of two new underground mines known as Kamoa 1 and Kamoa 2, as well as the initial decline development at Kakula West. A third 5 million-mt-per-year concentrator plant will be established adjacent to the two new mines at Kamoa.

Construction on the new box cut is nearing completion at the Kamoa 1 and Kamoa 2 mines, with decline development well underway to provide access to the main Phase 3 mining areas. Phase 3 is expected to increase copper production capacity to about 600,000 mt/y by the fourth quarter of 2024.