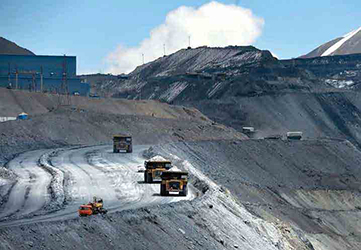 Centerra relinquishes control of the Kumtor mine, which produces about 500,000 oz/y of
gold.
Centerra Gold Inc. reached an agreement with Kyrgyzaltyn JSC and the Government of the Kyrgyz Republic to create a clean separation between the parties. Centerra will hand over ownership of the Kumtor mine, eliminating Kyrgyzaltyns involvement and interest in the company and resolving their disputes. Centerra said the agreement has been approved by the Government of the Kyrgyz Republic, including both the Kyrgyz Parliament and the Cabinet of Ministers.

Kyrgyzaltyn will transfer all of its 77.4 million Centerra common shares to Centerra, representing an approximate 26% interest in the company, for C$972 million ($771 million). Kyrgyzaltyn will receive a 100% equity interest in Centerras two Kyrgyz subsidiaries, Kumtor Gold Co. CJSC (KGC) and Kumtor Operating Co. CJSC (KOC), and indirectly, the Kumtor mine, plus a cash payment of approximately $36 million. Kyrgyzaltyn and the Kyrgyz Republic will assume all responsibility for the Kumtor mine. The agreement also is conditional on the full and final release of all claims of the parties, termination of all legal proceedings involving the parties with no admissions of liability and payment by Centerra of $50 million to KGC at the closing of the arrangement.

This arrangement is expected to provide value to Centerras stakeholders while allowing Centerra to move forward with a renewed focus on our core operations, including our Mount Milligan and Öksüt mines, where we expect to see continued strong operational performance, Centerra President and CEO Scott Perry said. To the entire Kumtor team and the people of the Kyrgyz Republic, I want to express how proud I am of all we have achieved together over the past several decades and wish you continued success.

Approximately $25 million will be withheld by Centerra and remitted to the Canadian tax authorities on account of Canadian withholding tax payable by Kyrgyzaltyn on the share exchange and the balance of $11 million will be paid to Kyrgyzaltyn on closing of the arrangement. No further steps are to be taken by the Kyrgyz Republic or Centerra in relation to the proceedings commenced in the Ontario Superior Court of Justice against Tengiz Bolturuk, a former member of Centerras Board of Directors.

Following the withdrawal and termination of the Kyrgyz proceedings, KGC and KOC will work together with the Kyrgyz Republic to petition the court to dismiss the Chapter 11 proceedings in U.S. Bankruptcy Court for the Southern District of New York. At the end of May 2021, the company filed Chapter 11 bankruptcy in the Southern District of New York. The court-supervised process provides, among other things, for a worldwide automatic stay of all claims against KGC and KOC. The Chapter 11 proceeding will not impact any other areas of the companys business, including the Mount Milligan mine in Canada, the Öksüt mine in Turkey and the molybdenum business in North America.

The company did this following a resolution the Kyrgyz Parliament passed on May 6, 2021, which instructed the government to install external management at the Kumtor mine. The government seized control of the mine in mid- May after sending government authorities to the mine, KGCs office in Bishkek, and the homes of several KGC employees. On May 16, Centerra initiated binding arbitration against the Kyrgyz government in response to actions taken against KGC, including fines and tax claims as well as legislation providing for its operations to be placed under external management.