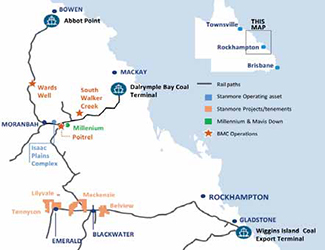 The cash consideration includes $1.1 billion cash on completion, $100 million in cash six months after completion and the potential for up to $150 million in a price-linked earnout payable in 2024. The sale is subject to customary competition and regulatory approvals, including approval from the Foreign Investment Review Board.

The acquisition would be transformational for Stanmore creating a leading global metallurgical coal producer with a portfolio of high-quality assets in Australias Bowen Basin. Stanmores production would grow to more than 11 million metric tons per year (mt/y). Stanmore said it is expecting even greater production now that it has restarted Isaac Downs and the ramp up of the Millennium and Mavis mines.

This transaction will see the company become one of the leading metallurgical coal producers globally and provides Stanmore with a portfolio of tier 1 assets. It will significantly increase our resources and reserves extending operational mine life to 25 years or more, Stanmore CEO Marcelo Matos said. Stanmore Resources would assume economic and operating control of BMC on completion of the sale, including its share of all current and future liabilities of BMC subject to certain limited exceptions. Completion is expected to occur in the middle of the 2022 calendar year.

BHP will continue to operate BMC until completion and work closely with Stanmore Resources to ensure a successful transition of ownership.