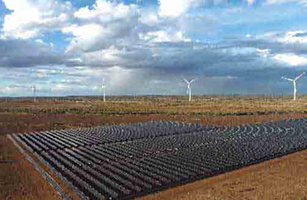 South African mining has struggled with electricity cuts and inadequate port and rail infrastructure, which in turn has held back investment. Now, the country hopes this will change as billions of dollars are set to be invested in power generation, ports and railways.

A series of regulatory changes, which will have far-reaching consequences for the countrys miners, are being implemented. The administration of President Cyril Ramaphosa is desperate to revitalize an ailing economy, which, according to Bloomberg, now has the highest unemployment in the industrialized world, at 44%. We are implementing a range of structural reforms to ensure that we all have a reliable power supply, and effi- cient ports and rail infrastructure, Ramaphosa said in parliament recently.

The first measure is to allow private energy production, which up until now has been mostly the sole preserve of Eskom, the state electricity utility. Private energy projects of up to 100 megawatts (MW) can be constructed. For context, a deep level underground mining operation requires 20-30 MW of energy to function, including the powering of ancillary equipment such as separation and processing plants.

Our initial estimates are that this development could lead to additional short and medium-term investment by the industry solely in embedded generation projects of around 27 billion rand (US$2 billion), said Roger Baxter, CEO of industry body the Minerals Council. This has the potential to raise South Africas overall growth rate. Most of the councils 79 members, who represent around 90% of the countrys mining activity, have shovel-ready plans to begin building their own power plants. Eskom subjects the industry  and the country as a whole  to regular power cuts that served as a large barrier to new investment.

One project already out the gate is that of Gold Fields, which is building a 40-MW solar plant. The plant will be at the companys South Deep operation in the Witwatersrand basin, west of Johannesburg. This will comprise 116,000 solar panels and cover an area of 118 hectares, roughly the size of 200 football fields. It will cut around $9 million off the mines operating costs, Gold Fields said in a statement. Many more such projects are expected, as the mining industry seeks energy independence.

Changes to the countrys port management will also deliver dividends to miners. Shippers have complained for years that ageing equipment such as cranes and stackers, as well as congested docks delay the movement of goods. Durban on the east coast, which handles 60% of the countrys trade, is especially problematic. And it isnt only South African commodity exporters who are affected, but other regional countries such as the Democratic Republic of Congo (DRC), Zambia, Zimbabwe, Botswana and Tanzania. Most of the DRCs cobalt, for instance, leaves Africa via Durban, as do shipments of copper concentrate from Zambia and Tanzania.

In June, an expansion of harbor infrastructure was announced. And in late August, the government said it would embark on a 100 billion rand ($7 billion) investment drive. Most of the money would be raised from private investors, who will also take over running port operations such as bulk handling. We want to bring the best of business to South Africa, to bring the technology that is required, but also the kind of cash that is required, said Pravin Gordhan, minister of public enterprises.

Durban itself would get a super-terminal to nearly double its capacity. While no partners have been named as yet, local business media has speculated that Gulf logistics firms such as DP World, and the Kuwaiti firm Agility are among likely candidates. The ruling party, the African National Congress, has avoided the word privatization when discussing state infrastructure, a concept that faces ideological obstacles among its many left-wing members. However, analysts see recent measures as a stealth means to bring in private sector capital.

The 100 billion rand in port infrastructure is only the start of private sector investment into state owned businesses, said Wayne McCurrie, portfolio manager at Ashburton Investment in Johannesburg. Politicians are stating that this is not privatization but this does not matter. The government just doesnt have the capital and their infrastructure is old. A further development is a decision to open the countrys rail network to third party operators. Until now Transnet, the state-owned firm that operates most rail capacity, has jealously guarded its monopoly.

The crucial dedicated coal line from Mpumalanga province to the east coast Richards Bay Coal Terminal (RBCT) has been especially hard hit by under-investment. The RBCT is the worlds largest coal export facility that can theoretically move up to 90 million tons of coal a year. However, capacity is usually way below that as Transnet struggles to keep up with demand, while lacking enough wagons, freight locomotives and other rolling stock. Coal producer Exxaro said in its latest results update it may have lost as much as 9 million tons in export opportunities this year, because of the lack of rail capacity.

The changes in product demand and Transnet performance has put a strain on our ability to produce coal at optimal levels, putting pressure on our unit cost in the Mpumalanga region, Exxaro said. The African Rail Industry Association (ARIA), which represents private operators mostly in the rest of Africa, said its members have as much as $3 billion to invest in rolling stock alone on the South African network.

ARIA CEO Mesela Nhlapo said opening the network is exciting news for the industry. Transnet has been unable to keep pace with demands of its customers, she noted. Countries such as Tanzania and Zambia already had third party access, and freight growth had increased more than 25% over the past year.