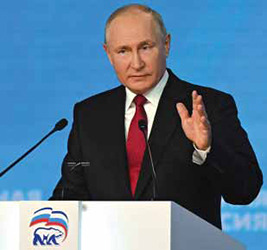 Russian President Vladimir Putin plans to raise taxes on metal
miners.
By Vladislav Vorotnikov
Russian President Vladimir Putin confirmed on August 6 that Russia would raise a mineral extraction tax (MEP) on metals producers in 2022. The new rates are expected to replace an increased export duty on metals, but the final decision on the new MEP rate is yet to be made. On August 1, the Russian government introduced the new export duty on nickel, aluminum, copper and steel of at least 15% with varying rates, targeting to charge mining companies an extra 160 billion rubles ($2.1 billion) by the end of the year.

The declared goal is to protect the defense and construction industries from a hike in raw materials costs in the background of the sharp rise of prices for most metals on the global market, Andrey Belousov, Russian deputy prime minister, explained during a government meeting late July. Since the beginning of the year, the prices for ferrous metals in Russia has increased 30% and non-ferrous metals have increased by 50%, the Russian state statistical service Rosstat estimated. The extra duty stands at $1,226 per metric ton (mt) for copper, $2,321/mt for nickel, $254/mt for aluminum, and $54/mt to $150/mt for steel products.

However, Russian mining firms are confident the real rationale behind the decision is to tap margins in the industry. The duty is exclusively fiscal in nature and is aimed at direct withdrawal of funds from the industry, the press office of Novolipetsk Steel said, explaining that the export duty, which is called to protect Russian customers, applies to some products not supplied to the domestic market.

Putin said the MEP for the Russian metal industry will also be increased in 2022 during a more recent press conference. The government has introduced higher export duties on the metallurgical industry, and the funds obtained, which fill the budget, are planned to be directed toward the construction industry. Next year, from January 1, I believe an increased MEP will be introduced, Putin said. Putin went on saying that prices on world markets jumped, and metal producers were trying to generate maximum profits by exporting, prompting a shortage on the domestic market. Can we inside the country take restrictive measures, Putin asked. We can and we should. This is exactly what we are doing.

The Russian press citing government sources reported that new MEP rates would cost metal companies an additional 100 billion rubles ($1.4 billion) per year and would replace the increased export duty. In addition to nickel, aluminum, copper, and steel, the government is reportedly mulling plans to raise the MEP on precious metals. Some reports indicate that the new rates are likely being linked to raw-material prices so that levies rise with metal prices.

The Russian Federal Tax Service estimated that metal companies pay the lowest taxes in the Russian mining industry. The tax burden in the segment is limited to 5.4%, compared to 48% in the oil and gas industry and 12.6% on average in other segments. Norilsk Nickel estimated the increased export duty would cost it $500 million in 2021. The company admitted the introduction of new fiscal measures in Russia in 2022 is highly likely.

The Russian Steel Association said it was too early to talk about the consequences of the new MEP introduction until the terms are finalized and disclosed.