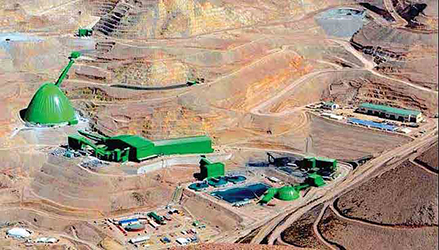 During 2020, Caserones produces nearly 127,000 mt of copper.
EMX Roylaty Corp. signed an agreement on August 16 for a 0.418% effective net smelter return (NSR) royalty on the Caserones copper-molybdenum mine, which operates in northern Chile, for $34.1 million in cash. The transaction, which will take place in two phases, is expected to close in September.

For the purchase of Caserones royalty, EMX formed a 50/50 partnership with Altus Strategies Plc to acquire equity with an effective NSR of 0.836% for $68.2 million. EMX and Altus each control 0.418% of the capital and each will be responsible for $34.1 million of the purchase price.

The Caserones open-pit mine was developed on a large porphyry copper-molybdenum deposit in the Atacama region, 162 kilometers (km) southeast of Copiapó, at an altitude of approximately 4,300 meters above the sea level. Currently, the mine is operated by SCM Minera Lumina Copper Chile SpA, which is indirectly owned by JX Nippon Mining & Metals Corp.

Caserones produces copper and molybdenum concentrates from conventional crushers, mills and flotation plants, as well as copper cathodes, solvent extraction and electrowinning. In 2020, the mine produced 104,917 metric tons (mt) of copper in concentrate, 2,453 mt of moly in concentrate, and 22,056 mt of copper as cathodes.