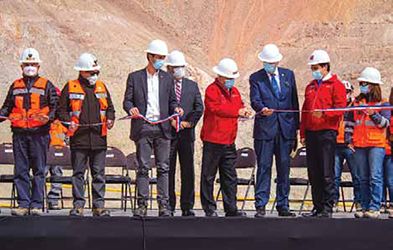 Chilean President Sebastían Piñera cuts the ribbon on August 24 at the Rajo Inca inauguration.
In a ceremony headed by President Sebastían Piñera, the Chilean state-owed mining company Codelco inaugurated the construction of the Rajo Inca (Inca Pit) project, which extends the operating life of Codelcos El Salvador Division. This will increase the mine life of the operation, which is the oldest mining city-camp in the region, by 47 years. The operation will also switch from underground to open-pit mining.

Codelco has placed an investment of more than $1.3 billion for the construction phase, which is expected to be completed within 30 months. Its pit startup is scheduled for the first quarter of 2023. The companys goal is to increase the annual production of fine copper from 60,000 to 90,000 metric tons (mt) per year.