BHP Will Spend $5.7B on Jansen Project 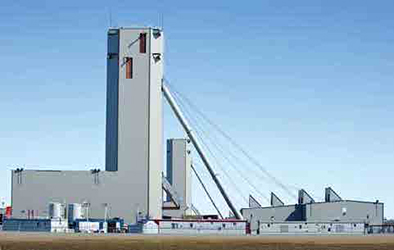 BHP expects to produce 4.35 million mt/y of potash from the Jansen mine.
BHP has approved $5.7 billion in capital expenditure for the Jansen Stage 1 potash project in the province of Saskatchewan, Canada. BHP CEO Mike Henry said Jansen is aligned with BHPs strategy of growing its exposure to future facing commodities in world-class assets, which are large, low cost and expandable.

This is an important milestone for BHP and an investment in a new commodity that we believe will create value for shareholders for generations, Henry said. Jansen is located in the worlds best potash basin and is expected to operate up to 100 years.

Jansen Stage 1 is expected to produce approximately 4.35 million metric tons per year (mt/y) of potash and has the potential for further expansions. First ore is targeted for 2027, with construction expected to take approximately six years, followed by a ramp-up period of two years.

Jansen Stage 1 includes the design, engineering and construction of an underground potash mine and surface infrastructure, including a processing facility, a product storage building, and a continuous automated rail loading system. Product will be shipped to export markets through Westshore, in Delta, British Columbia.

BHP has already invested $4.5 billion in the project, which includes construction of the shafts and associated infrastructure ($2.97 billion), as well as engineering and procurement activities, and preparation works related to Jansen Stage 1 underground infrastructure. The construction of two shafts and associated infrastructure at the site is 93% complete and expected to be completed in 2022. To date, approximately 50% of all engineering required for Jansen Stage 1 has been completed, significantly de-risking the project.