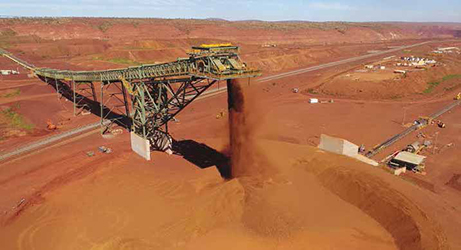 South Flank will eventually export 80 million mt/y of iron ore from the Pilbara.
On May 20, BHP achieved first ore at its US$3.6 billion South Flank mine in the central Pilbara, Western Australia. With the existing Mining Area C, it will be the largest iron ore hub in the world, producing 145 million metric tons (mt) of iron ore per year, according to BHP. South Flank is an 80-million-mt/y mine and will be the most technically advanced high-quality iron ore mine in Western Australia, the company said.

South Flank is Australias largest new iron ore mine in more than 50 years and has been delivered safely on time and on budget, BHP President Minerals Australia Edgar Basto said. South Flanks high-quality ore will increase the average iron ore grade from 61% to 62%, and the overall proportion of lump from 25% to 30%-33%. The project has created more than 9,000 direct and indirect jobs during construction and will provide more than 600 operational roles through its life, Basto said.

The ore from South Flank will supply global steel markets for the next 25 years, he added. South Flank is on Banjima country, and this milestone would not have been possible without their support and collaboration over many years, Basto said. We are proud of our longstanding partnership and strong working relationship with the Banjima people, and we thank them for their vital contribution to this success. The South Flank project has expanded the existing infrastructure at Mining Area C and involved construction of an 80-million- mt/y crushing and screening plant, an overland conveyor system, stockyard and train loading facilities, procurement of a new mining fleet, and substantial mine development and pre-strip work.