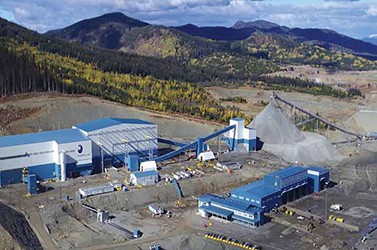 Centerra Gold expected to produce more than 470,000 oz of gold at the Kumtor mine in 2021.
The Kyrgyz Government effectively seized control of the Kumtor mine during mid-May after sending government authorities to the mine, Kumtor Gold Co.s (KGC) office in Bishkek, and the homes of several KGC employees, according to Centerra Gold, KGCs parent company. Centerra is now no longer in control of the Kumtor mine and it said it cannot ensure the safety of the mines employees or operations. Shortly before the government took control, all key safety, monitoring and operational systems at the mine were functioning properly. Centerra said it did not disable any systems, and the mine was operating without incident.

On May 6, the Kyrgyz Parliament passed a resolution, instructing the government to install external management at the Kumtor mine, Centerra Gold reported. The company said the new law only applies to Centerra and its Kyrgyz subsidiary, Kumtor Gold Co. (KGC), and associated developments of Centerra and KGC, and it was passed in a single day. Centerra has suspended access of all local KGC employees in the Kyrgyz Republic to Centerras global IT systems to prevent any unauthorized intrusions into those systems. None of those systems are required to safely operate the mine. The company urged the Kyrgyz Government to take all measures necessary to ensure the safety of Kumtors employees and the mine and to desist from further hostile acts, including document and computer seizures and the intimidation of senior KGC personnel who have been subjected to visits by the security services to their homes and threatened with unjustified criminal action.

During mid-March, the company received tax claims from the Kyrgyz Republic State Tax Service for approximately $106 million related to withholding taxes on dividends paid to Centerra during 2016 and 2017; and a claim for approximately $17 million related to payroll deductions not withheld by KGC on certain national employee compensation during 2016 and 2017. Each of these claims was initially raised by the State Tax Service in 2018, but subsequently withdrawn or terminated pursuant to decisions of the State Tax Service in March 2018. The State Tax Service has now annulled its previous decision reviving the claims, which include significant penalties. The company said it remains willing and available to engage with the government in a constructive dialogue on the matters it considers to be the subject of dispute. At the same time, Centerra said the actions of the government leave it no choice but to continue to protect its interests and those of its shareholders and KGC through all legal means, including binding international arbitration and otherwise.

Centerra is suspending its previously issued 2021 guidance and three-year outlook relating to the mine. Kumtor produced more than 90,000 ounces (oz) of gold during the fourth quarter of 2020. In February, Centera offered guidance on the Kumtor mine for 470,000-510,000 oz gold in 2021 growing steadily to 550,000-600,000 oz in 2023. The company has also initiated proceedings in the Ontario Superior Court of Justice against Tengiz Bolturuk, a former member of its board of directors, in response to flagrant breaches of his fiduciary duties to the company related to the recent seizure of the Kumtor mine by the Government of the Kyrgyz Republic.

As previously announced, the company is investigating recent conduct by Kyrgyzaltyn JSC, including Bolturuk, its former nominee. Bolturuk, a dual Canadian and Kyrgyz citizen, joined the Centerra Board in December 2020 and resigned on May 17. Two days after his resignation, the Kyrgyz authorities announced that the Kyrgyz Government had appointed Bolturuk as the external manager of Kumtor Gold Co. Centerra has learned that Bolturuk had been in discussions with the Kyrgyz Government and others regarding plans to seize control of the Kumtor mine.

In addition, Centerra learned that on May 12, prior to the seizure of the mine, Kyrgyzaltyn JSC attempted to divert approximately $29 million to an unauthorized bank account using a forged payment instruction sent to a third party. The account was purportedly opened in the name of KGC. This attempted fraud was identified by the third party and was not successful.

As this edition was going to press, Centerra Gold filed for Chapter 11 bankruptcy protection in the Southern District of New York. The court-supervised process provides, among other things, for a worldwide automatic stay of all claims against KGC and KOC. Centerra said it hopes that this internationally recognized, orderly restructuring process will facilitate potential negotiations with the Kyrgyz Government. The Chapter 11 proceeding will not impact any other areas of the companys business, including the Mount Milligan Mine in Canada, the Öksüt Mine in Turkey and the molybdenum business in North America.