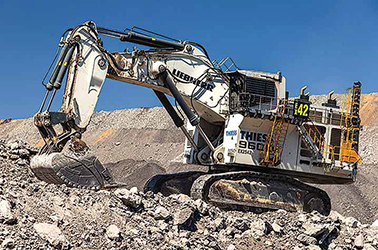 Prior to the launch, Liebherr performs trials at Coronados Curragh North metallurgical coal
mine, operated by Thiess. (Photo: Liebherr)
The newest hydraulic excavator on the market was designed with miner input and is meant to effectively replace a highly popular predecessor model. The input led to, as expected, important improvements to the cabin. It also led to cuts in the overall amount of information displayed on in-cab screens. The result is a machine that is proving easier to operate, which bodes well for companies seeking to diversify staff, the supplier reported. It also bodes well for operations that mainly want to improve uptime and production. These items top the list of benefits offered, which is long, and which the supplier is eager to share.

600-mt Shovel Sets New Standards
Liebherr launched the R 9600 and, on the strength of the field results from deployments of pre-series units, the excavator is already receiving much interest from established and new customers. Several R 9600 units have been sold, and several projects are in discussion in additional new markets, said Michel Runser, product manager, hydraulic shovels, Liebherr. We see that it is not only the existing customer base who are requesting information about the R 9600, but also new potential customers. This is due reward and recognition for all who have been involved in the development of the machine. Liebherr reported the 600-metric-ton (mt)-class excavator sets new standards for the industry, and that it builds on the long legacy of success of predecessor models.

The new R 9600 aims to reach the highest standard in terms of safety, sustainability, performance, lifetime, total cost of ownership, ease of maintenance and more, Liebherr reported. In backhoe configuration, with a heavy-duty wear package, the R 9600 comes with a 37.5-m3 shovel. It loads 190-mt trucks in three passes, 240-mt (T 264) trucks in four passes, 300-mt (T 274) trucks in five passes, and 375-mt (T 284) trucks in six passes. In face shovel configuration, with the same package, it has a 37-m3 shovel. The shovel has two QSK50 Cummins engines. For emission-regulated regions, a U.S. EPA Tier 4F-/EU Stage V-compliant version is available with the latest SCR after-treatment technology, Liebherr reported. Complying with stringent emission regulations, the SCR system reduces nitrogen oxides by injecting a liquid reductant into the exhaust stream.

The listed benefits are many and topped by increased digging and breakout forces. The shovel features Liebherr Power Efficiency solutions meant to lower total cost of ownership, Liebherr reported. These proprietary management systems for the engine and hydraulic system controls substantially reduce fuel consumption without compromising the overall productivity of the machine. Weight optimization and other component design improvements result in increased overall production rate without compromising component lifetime, Liebherr reported. Designed to be used in all applications globally, the R 9600 is built to last more than 80,000 machine operational hours. The shovel features sealed-for-life heavy-duty carrier and track rollers with the companys roller path design and track pad design.

The uppercarriage structure is a completely new development, the supplier reported. The robust undercarriage, with a fatigue-resistant steel structure, is enhanced with a new hydraulic track tensioning system. The uppercarriage design allows for quick and easy maintenance activities, and is accessible via a hydraulically controlled, ergonomic 45° stairway, Liebherr reported. Enlarged walkways with handrails and non-slip perforated steps allow for safe and convenient inspections and maintenance at all levels of the machine, including engine and powertrain components. Major parts were designed and positioned for easy access and maintenance, the supplier reported. The central service flap provides fluid and lubricant access to all components and systems, which reduces potential downtimes. Refill and drain points are accessible from the ground.

The 14-m3 cabin is on the back left side, and is designed to reduce vibrations and limit noise, Liebherr reported. The operators seat has been positioned as far left as possible in order to provide the best operator visibility of the attachment and working area, Liebherr reported. Ambient and low-level LED-lights make working at night easier and safer, the supplier said. The operator station is user-friendly and equipped with modern touch screen displays.

A perimeter visibility system uses four cameras and a monitor to provide 270° vision around the machine. The air conditioning system is modular for easy modifications or replacement. Cab air circulation is optimized, and the seats are cooled. In addition, the R 9600 is delivered from the factory with the Liebherr Technology Products to enhance operator effectiveness, increase operational safety, increase asset operational effectiveness, optimize diagnostic processes and maintenance activities, and to release machine automation functions, said George Barturen, product manager, hydraulic excavators, Liebherr. 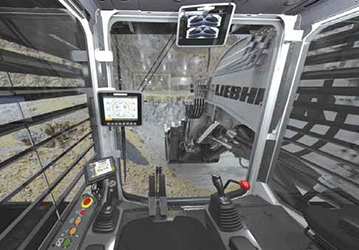 A new, more spacious cab provides the operator with more information and better sight
lines. (Photo: Liebherr)
Operator assistance systems help the operator meet performance expectations. Truck Loading Assistant helps the operator attain optimal productivity and efficiency, Liebherr reported. The system determines and advises on the number of passes required to achieve the target payload of the truck. With 99% measurement accuracy, the system measures the instantaneous bucket payload and provides real-time information to the operator. Optional on backhoe versions of the machine, Bucket Filling Assistant allows for easier and faster bucket filling with automated attachment movements providing consistent bucket fill factor, load after load even in the toughest digging conditions, Liebherr reported. As a result, the overall productivity improves while the operators fatigue level is reduced.

Bucket Filling Assistant has some intelligence to do corrections of kinematics, Runser said. It takes over when the operator starts to struggle with the digging conditions. It can help an operator achieve a very good fill factor and performance. The unit is based on the R 9800 and the R 996-B excavators, which have a storied history and a high population. Design philosophies proven by the R 9800 were applied to the R 9600, Runser said. We can at once see examples of this in the track frame and travel drive design of both machines, swing gear design and attachment design.

Those designs also spoke to some of the lessons learned from the R 996-B, which was released in 1995. The very popular (600-mt) R996-B has been the benchmark in the mining market for the past 25 years, especially in Australia, where more than 70% of these excavators have or are operating today, accumulating 5.5 million machine hours, Liebherr reported. With the ever-evolving needs of customers and the mining industry, the R 996-B base platform was not able to meet future industry needs, Barturen said. Hence the development of the R 9600 was started, with a completely new platform in every aspect that addresses the requirements of modern mining, from improved productivity to future proofing and addressing the needs of industry through diversity and inclusion.

Those requirements were identified and supplied by the operators, equipment personnel, and procurement groups to Liebherr engineering, sales and marketing teams, Liebherr reported. Valued mining customers input has once again played an important and pivotal role in development, Runser said.

During development, customer representatives and Liebherr local experts were regularly informed and took part in the design review to ensure the perfect working environment, he said. The development of the cabin exemplifies the close cooperation, Runser said. We conducted several workshops to gather the expectations in terms of comfort, ergonomics, operator visibility or information available on the screens, he said. We had a really close look at what the operator needs to have in terms of screens, information and data. One example of the results is simplified error codes. The error code is something very basic: green, yellow or red, Runser said. You dont have complicated messages. It is very clear and the operator knows exactly what he has to do and how to deal with things.

Another result is the cab sited at the heart of the machine with all the electronic modules, he said. And for this vital part, we sought to offer space and visibility to ease the troubleshooting or the implementation of third-party systems. Testing of the R 9600 occurred at the factory proving grounds in Colmar, France. In Q1 2020, pre-series units were deployed to two sites, BHPs South Flank iron ore mine and Coronados Curragh North metallurgical coal mine, operated by Thiess. The first machines were operated on the eastern and western seaboards in coal and iron ore operations, respectively, Barturen said.

The excavator will be used on a collaborative production study to validate the performance of the excavator in coal. Additionally, a study intended to understand the performance gains from a new automation feature, Bucket Filling Assistant, a combination of Anti-Stalling and Semi-Automatic Bucket Filling functions, will be conducted conjointly, the supplier reported. The technology ensures Thiess can reliably and efficiently meet production schedules and drive repeatable, high-quality outcomes for our clients, Liebherr reported. So far feedback from these sites showed measurable improvements in cycle times, driving down cost/mt. The R 9600 provides a new level of productivity for the 600-mt class, Barturen said. 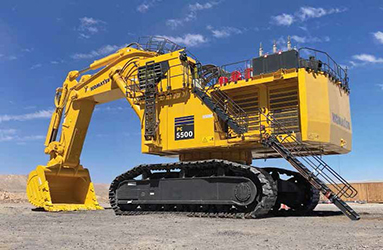 With 179 sold, the 550-mt twin-engine PC5500-11 demonstrates its reliability, power and
popularity. (Photo: Komatsu)
Operators, fitters and maintenance personnel are amazed with the result and how the integration of all the workshops topics have been considered in the final design, he said. The field data, for example, shows big improvements compared to the R 996-B in cycle time and the level of productivity, Runser said. The success allowed Liebherr to essentially bypass the predevelopment phase, Barturen said.

With rich rewards. Multiple units have been ordered in the months since. There will be a total of eight machines by the end of 2021 in operation within Australia, with the 10th machine being assembled currently in the factory due to the demand for this machine, Runser said. In Q4, the shovel will enter serial production, Liebherr reported. Fuel Consumption Optimized, Tier 2, Tier 4, Backhoe and Face Shovel configuration are fully available, and the electric-drive version with cable reeler option will be available soon, another productive choice for mine sites having the required electrical infrastructure.

Rugged Excavator Tallies 8M hours
Komatsu reported the PC5500-11 excavator has a robust steel structure and advanced technology that give it heightened precision, productivity and longevity. With 179 sold that combine for roughly 8 million operating hours, the unit has become one of the most popular excavators with demonstrated reliability as a powerful workhorse with excellent digging force, the company reported. The excavator was designed to meet the standards of the European Machinery Directive and Earth-Moving Equipment Safety Round Table design philosophies.

Designed with operators in mind, the 45° ladder system offers comfortable ascent and descent, and the updated emergency exit system allows ease of egress from two independent locations, Komatsu said. For situational awareness around the machine, KomVision can provide the operator an expansive view of the surrounding work area from inside the cab. 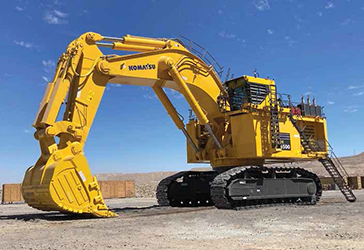 In front-shovel configuration, the boom is 7.6 m. Breakout force is 1,900 kN. Tear-out force is 1,850 kN. In backhoe configuration, the boom is 11 m. Breakout forces is 1,500 kN. Tear-out force is 1,300 kN. The excavator can be customized to suit the application. The standard 29-m3-capacity bucket is designed for the industry-standard density of 1.8 tons/m3 to meet a wide range of material densities, Komatsu reported. To match the demands of your specific material characteristics, we offer a comprehensive variety of buckets, customized in volume and protection. A cold weather kit or additional cooler options are available to fit your operations global terrain requirements.

Demand Grows for Electric Excavators
Hitachi reported growing interest in electric excavators in North and South America. We definitely are happy to see countries and mining operations that are leading the investment in electrification, Kendall Mattson, production specialist, Hitachi Construction and Mining Division, said. There are many advantages to electric machines, including improved efficiency, noise reduction, increased uptime and a decrease in greenhouse gas emissions to name a few. 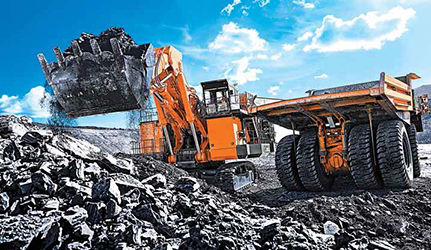 The EX-7E Series machines offer a reduction in noise, which allows the operator greater awareness of the area around them, Hitachi reported. Just as with all Hitachi equipment, operator comfort and productivity are paramount with the EX-7E Series.