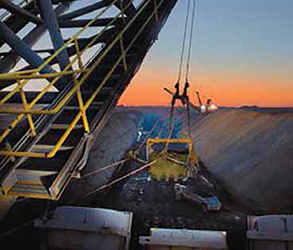 A dragline moves overburden at the Sabine mine in Texas.
North American Coal Co. (NACCO) delivered disappointing fourth quarter earnings, saying its revenues decreased substantially compared with the fourth quarter of 2019. The company attributed the results to a reduction in tons delivered by Mississippi Lignite Mining Co. due to a substantial decline in the number of days the customers power plant operated in 2020 compared with 2019. During 2020, the company also closed two mines in Texas, the Eagle Pass mine operated by Camino Real and the Marshall mine operated by the Caddo Creek Resources. Total coal deliveries for Q4 2020 were 7.5 million tons compared to 8.2 million tons in Q4 2019.

For 2021, NACCO said it expects coal deliveries to be comparable to 2020. We continue to believe that coal will play an important role in electricity generation capacity in the U.S., said J.C. Butler, president and CEO, NACCO. The recent events in Texas show us the importance of an electrical source thats readily dispatchable. We are actively engaged in keeping our coal customers competitive and we will continue to do so.

Prior to the recent power outages in Texas, the owner of the power plant served by the companys Sabine mine, Southwestern Electric Power Co., was planning to retire it in 2023.