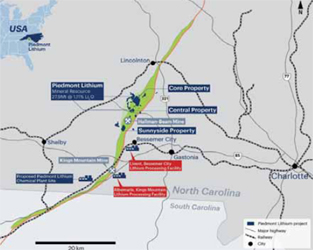 Piedmont controls a significant lithium deposit located in the Carolina
tin-spodumene belt near modern infrastructure and Charlotte,
North Carolina, USA.
Piedmont Lithium Ltd. has entered into a binding agreement with Tesla Inc. for the supply of spodumene concentrate (SC6) from its North Carolina operations. The agreement is for an initial five-year term on a fixed-price binding purchase commitment from the delivery of the first product, and may be extended for a second five-year term.

Piedmont controls approximately 28 million metric tons (mt) grading 1.11% lithium oxide (Li2O) located in the Carolina tin-spodumene belt that hosted the Hallman Beam and Kings Mountain mines. The Piedmonts commitment to Tesla represents approximately one-third of Piedmonts planned SC6 production of 160,000 mt per year (mt/y) for the initial five-year term. Sales are expected to generate between 10%-20% of Piedmonts total revenues from its proposed integrated mine-to-hydroxide project for the five-year term. The agreement is conditional upon Tesla and Piedmont have agreed to a tentative start date for spodumene concentrate deliveries between July 2022 and July 2023 based on the development schedules of both parties.

We are excited to be working with Tesla, which represents the start of the first U.S. domestic lithium supply chain and a disruption to the current value chain, Piedmont President and CEO Keith D. Phillips said. The agreement highlights the strategic importance of Piedmonts unique American spodumene deposit and confirms the trend toward spodumene as the preferred feedstock for the lithium hydroxide required in high-nickel batteries. Phillips said Piedmont will now accelerate its mine/concentrator development to support Teslas plans, work to further expanding its mineral resources, and potentially increase its planned annual spodumene concentrate production capacity. We will simultaneously advance our plans to produce lithium hydroxide in North Carolina, using a combination of internally produced spodumene concentrate as well as material sourced from other producers around the world, Phillips said.