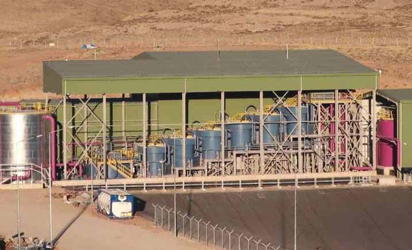 The CIC tanks at Öksüts ADR plant remove gold from cyanide solution. (Photo: Centerra Gold)
Canada-based Centerra Gold Inc. announced that the Öksüt Gold Mine located in Turkey has achieved commercial production as of May 31. Since first gold pour on January 31, the Öksüt gold mine has continued to ramp up mining, crushing, stacking, irrigation of the heap leach pad, as well as, the operation of the ADR plant and gold production, the company said.

President and CEO Scott Perry said, Commercial production at Öksüt marks a major milestone for the company. Öksüt was delivered on time and under budget. Centerra now has three producing operations that are expected to deliver growth and value for shareholders, Perry said. This includes the Öksüt mine, the Kumtor mine in the Kyrgyz Republic and the Mount Milligan mine in British Columbia, Canada.