Barrick Will Invest $1.3B in Pueblo Viejo Expansion 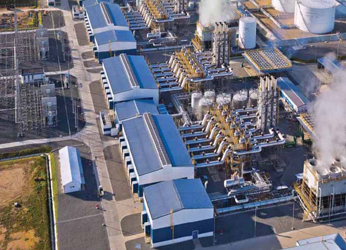 Conversion of Quisqueya I power plant (above) to natural gas will help reduce
Pueblo Viejos power generation costs by 30%. Greenhouse gases will be reduced
by 30% and and the mines dependence on oil will be significantly decreased.
The proposed expansion of Barrick Gold Corp.s Pueblo Viejo gold mine in the Dominican Republic will extend its life as well as its contribution to the economy until 2040 and beyond. President and CEO Mark Bristow said the project would require an initial investment of $1.3 billion to expand the process plant and the tailings facility.

This will allow the mine to increase exports by $22 billion and generate more than $4 billion in taxes at a gold price of $1,500 per ounce, according to the company. Between 2013 and 2016, Pueblo Viejo paid $1.8 billion in direct taxes and last year its exports accounted for more than 38% of the countrys total. The companys workforce, which is 97% Dominican, is expected to grow as the project develops and it will increase opportunities for female participation (currently 12% of the workforce). It will also further promote the development of the local economy based on the mines suppliers and contractors.

Our aim is to continue contributing to the social and economic development of the Dominican Republic by applying our sustainability philosophy to create longterm value for all our stakeholders, especially the governments and people of our host countries, Bristow said. Without this project mining at Pueblo Viejo would have ceased in the next two years, Bristow said.

The expansion will enable the mine to exploit the lower grades in the orebody. Mill and tailings capacity will be expanded, without which mining would end in 2021 and production would end in 2031. The plan will allow mine to maintain total gold production averaging 800koz per year after 2022. It could also potentially convert approximately 11 million oz of indicated resources.