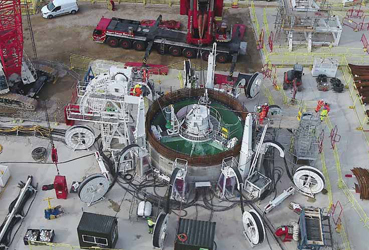 Shaft sinking operations begin for the material transport system, which will deliver ore
from the Woodsmith mine to the port at Teeside in northeast England.
American, through its wholly owned subsidiary Anglo American Projects UK Ltd., has completed the acquisition of Sirius and its Woodsmith Project in the U.K. This follows the January announcement that the boards of Sirius Minerals Plc, Anglo American and Anglo American Projects UK Ltd. had reached an agreement on the terms of a recommended cash acquisition of Sirius.

Today marks a new chapter for the Woodsmith Project, the employees of the business and everyone who has an interest in its future, Anglo American CEO Mark Cutifani said. This is a project with clear potential as a Tier 1 supplier of premium quality, low carbon fertilizer to help meet food demand for a fast-growing global population.

The mining operation has been designed to have minimal physical impact on its surroundings and progressing its development, he added. We recognize the role the project will continue to play in its local communities and, as promised, I am pleased to confirm that we are today transferring £1 million into the projects charitable foundation, Cutifani said. He added that the company will contribute even more over the next three years.