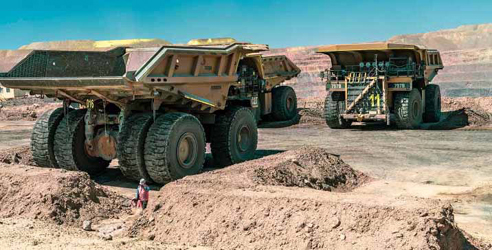 A miner parks his truck for shift change at the Antucoya mine in Chile.
In 2019, Chilean copper producer, Antofagasta Minerals produced 770,000 metric tons (mt) of fine copper, which broke the record it obtained in 2018 when it produced 725,300 mt. This is a 6.2% increase, which includes its Los Pelambres, Antucoya, Centinela and Zaldívar operations, which also contributed to a net cash cost of $1.22/lb. In addition to improving production costs, during 2019, we suffered no fatalities at our sites, which is always our first priority, CEO Iván Arriagada said.

Following the events in Chile, all our mining operations have been operating according to their respective plans, although the Antofagasta Bolivia Railroad (FCAB), which also belongs to Antofagasta plc, has had some interruptions due to occasional blockages in Antofagasta, Arriagada said.