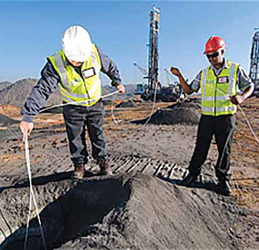 Blasters load a record round at Caval Ridge in Australia.
(Photo: BME)
One of the ways mining operations remain competitive is through economies of scale. Similar to other bulk commodities, moving large amounts of rock at the lowest possible cost translates to profits. Productivity in this area remains key, especially with the drilling and blasting programs for open-cast mines.

Through constant innovation, the suppliers that support drilling and blasting operations are improving the products they provide. Digital technologies are reducing the amount of manual data collection traditionally associated with blast planning and execution. It saves time, reduces the likelihood of error and provides feedback on performance.

As far as the industrys quest to reach best-in-class drill and blast milestones and build further upon them, suppliers can be a great help to miners, Keenan explained. We operate in a variety of locations and for a range of customers, Keenan said. We see what works best and we can compare results across sites. It is all part of a vital process of raising the bar for a more efficient and productive mining sector.

Keenans team at BME recently extended its own world record for the highest number of AXXIS detonators fired in one blast. At the Caval Ridge coal mine in Queensland on November 16, 7,350 AXXIS electronic detonators were successfully fired by the blasting team. The 1,700-m-long blast pattern was loaded over five days, then logged, tested and fired within two days. There were no errors or delays in the execution of the shot. The support provided by BMEs technical team fostered the teamwork environment that allowed the safe detonation of this record blast.

Transition to Electronic Delays
The transition from non-electric to electronic delay detonators (EDDs) in the field of blasting has brought many benefits to mining productivity, but there are plenty of advantages to be gained. BME Technical Director Tony Rorke highlighted the focus in recent years on the flexibility in blast timing that EDDs allow, and more specifically on the value of longer timing delays.

When we were first exploring the capability of EDDs, we were impressed by the accuracy that blasting with this technology allowed us, Rorke said. This accuracy and reliability was a huge step forward, ensuring that there were no outof- sequence blasts. When using non-electric initiation systems, there were certain traditional timing conventions that were employed. These were based on the fact that accuracy decreased significantly as the length of the pyrotechnic delay elements increased and that the downlines may be severed (cut-offs) during a blast before the firing signal reaches the detonators thus leading to dangerous misfires. 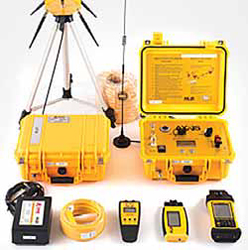 The AXXIS electronic delay detonating system includes a
blasting box and handheld, the Logger, the Smart Line
tester and the GII detonators. (Photo: BME/AXXIS)
To get the detonators to fire in some acceptable sequence, therefore, delay periods were in the past kept as short as possible, he said. The longer downhole delay has the dominant impact of firing time accuracy, so the risk of outof- sequence initiation is a function of the in-hole detonator. Keeping this short as possible led to delay periods of between 350 milliseconds (ms) and 550 ms becoming standard for in-hole delays in surface blasting.

The result of these in-hole delays was that surface delays had to be notably shorter, to ensure an adequate burning front  so standard delays most commonly used today for surface connections there is a greater risk of cable cutoffs caused by short burning fronts.

None of these problems exist with EDDs, Rorke said. Their accuracy allows for short delays with little risk of non-sequential firing. Furthermore, each detonator counts down independently  irrespective of whether the cable attached to it is cut. This means that blast planners can program long delays without worrying about misfires caused by downline cutoffs. This improves the flexibility in timing designs enormously, allowing for complex and effective timing designs. The result is a range of blast outcomes that can effectively change the mining method and significantly reduce costs.

According to Rorke, rock takes around 30 ms to react to the energy of an explosion, depending on geology. This response time has led blasters to lengthen the timing delays in search of better results  and they have been rewarded. Blasting results have improved as the timing delays increase  delivering improvements in a number of areas including ore dilution control, through-seam blasting, underground blasting, trim blasting and drill pattern variation within a blast. The problem, however, is that the adoption of EDDs is not always followed by any innovation in blasting practice.

My experience is that  when operations convert from non-electric initiation systems to electronic detonators  there is a reluctance to give up the familiar 17 x 42 ms or 42 x 67 ms combinations, and miners impose these delay periods on EDDs, he said. This restricts the benefits of electronics to only the accuracy component and ignores the much more powerful flexibility component. Through-seam blasting is another valuable innovation for coal, not used much in South Africa, but successfully employed in the U.S. and Australia. The principle is to separate the charge in the seam and the charge in overburden with an aggregate deck. The charges in the overburden are fired first, followed by the charges in the deck zone a few seconds later. This can only be achieved using EDDs, as the firing of the top layer cuts of the downlines to the detonators in the layer below.

A time lag of a few seconds allows the waste to settle back on top of the seam, he said, so that when the seam charges fire, the overlying waste effectively blankets and confines the seam portion of the blast and thus prevents heave and dilution. Rorke urged mines to actively explore the power of EDDs to achieve timing designs and results that are simply not possible with non-electric initiation systems.

The binocular cameras of the FRAGTrack system can be
mounted on a shovel or a conveyor to measure fragmentation.
(Photo: Orica)
FRAGTrack delivers accurate and reliable fragmentation measurements on both face-shovels and conveyors. The greater sampling frequency, enabled by the fully autonomous system, provides better insight, allowing for visualization and comparative analysis of multiple sample data sets. It also improves safety benefits by reducing manual sampling methods on the muck pile. The system uses binocular cameras and an innovative proprietary hybrid 2D/3D image processing algorithm. Designed for harsh operating environments, the hardware can handle temperatures ranging from below -30°C (-22°F) to above 45°C (113°F), across a range of rock types and hardness levels.

FRAGTrack won the 2019 Hunter Manufacturing Award (HMA) in two respective categories: Excellence in Innovation and Excellence in Product Design. It was recognized for its unique integration with the BlastIQ Digital Blast Optimization Platform suite. The HMAs are regional awards presented to developers in the Hunter Valley of New South Wales, Australia. In accepting the award, James Dampney, senior manager-digital solutions for Orica, said, Our focus on customer-centric innovation has always been a cornerstone of Oricas strategy, this award is recognition of that focus. Driven by the needs of our customers to accurately assess blast outcomes including fragmentation, we continue to invest in developing intelligent and autonomous measurement systems that are easily integrated into existing mine ecosystems.

DetNet Boosts Wits Research on Blasting
A state-of-the-art smart blasting system was officially handed over to the Wits Mining Institute (WMI) by electronic blast initiation specialists, DetNet. The BlastWeb system has been installed in the mock mining operation on the Wits West Campus, and promises to boost both research capacity and learning at the university. DetNet is an industry partner in the WMIs Sibanye-Stillwater Digital Mining Laboratory (DigiMine). According to WMI director and professor, Fred Cawood, the system will be a vital resource for masters and Ph.D students in mining engineering. Wits School of Mining Engineering is located at the University of the Witwatersrand in Johannesburg, South Africa.

Blasting and explosives is a very specialized field, and BlastWeb will allow researchers to do a range of tests using the system, said Cawood. Key research areas that will benefit include: the relationship between blasting and seismicity; optimal rock fracturing using explosives; and safe, controlled blasting practices. He said access to the system gave Wits a significant resource in helping the industry realize its goal of zero harm. Electronic blasting from a control room puts distance between mine workers and risk, he said. The system also has a powerful analytics element, so workers can inspect the quality of the blast from the control room. 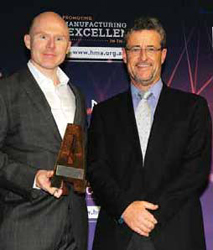 Excellence in Product Design Award 
James Dampney, senior manager, digital solutions (left),
Professor Steven Weller, faculty of Engineering and
Built Environment, The University of Newcastle (right).
The Blasting Control Unit (BCU) has been installed along the crosscut of the mock tunnel at Wits, with 43 dummy detonators connected to the development end. The systems hardware and software are installed in the WMIs DigiMine control room, providing the analytics from each simulated blast. Communication between the BCU and the control room is carried by the Wits ethernet.

Dyno Nobel Launches ?E2
Dyno Nobel recently released what it calls the next evolution of Differential Energy, the ?E2 software system. Enabled by an in-truck control panel, DynoLogix, this new software system uses data from outside sources, such as drills, face profiles or other data, which characterizes rock properties to allow targeted placement of energy in the blast hole. The ?E2 system can also send loading instructions directly to the pump truck control system ensuring boreholes are loaded as designed.

The ?E2 system can improve shovel dig rates, improve crusher throughput and lower overall drill and blast costs, according to Dyno Nobel. Furthermore, the company said this new system improves operator efficiency by simplifying the loading process and allowing explosives energy to be accurately placed in the blasthole, thus reducing oversize and/or fines. The ?E2 Pre-Load desktop software, part of the new ?E2 system, allows users to precisely place energy within the shot and can be used by blasters and engineers to optimize energy placement within each borehole in the shot. The system can import data from multiple sources, including data from the Dyno Nobel mobile suite of applications that can create shot designs, to allow users an easy way to control the loading of a blast. Users can view powder factors that can be changed on the fly, which gives the engineer and blaster the ability to understand explosives usage prior to loading the shot, enabling them to control the actual shot cost. 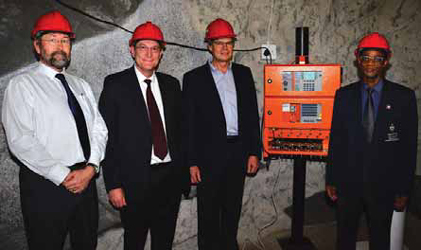 From the left, Ian Jandrell, dean of the Wits Faculty of Engineering and the Built Environment; Fred
Cawood, director of the Wits Mining Institute; Dr. Gys Landman, CEO of DetNet; and Cuthbert
Musingwini, head of the School of Mining Engineering with the Blast Control Unit (BCU).
Dyno Nobel recently conducted a trial shot using its ?E at a quarry in the Laurentian region of Quebec, Canada. The quarry used a 1070G blend-like product with an average density of 1.2 g/cc, for most of its operation. A pattern of 3.96- x 4.27-m, on 102-mm diameter, 2.1 m stemming, with 0.15 to 0.3 m of subdrill produced satisfactory results with a bench height that varied from 10.7 to 17 m. The quarry, however, wanted to improve the fragmentation by reducing fines and generating more 150- to 500-mm material. For the purpose of the test, the blast parameters remained constant to compare the performance of bulk emulsion. ?E was introduced next to the 1070G blend in the same blast. Four different segments of the product, with different densities, were introduced into the boreholes. This reduced the density from 1.2 to 1.14 g/cc.

Following the trial shot, a fragmentation analysis using WipWare tools was conducted to quantify changes, if any, to compare the two products: ?E vs 1070G blend. Based on numerous photo analyses, Dyno Nobel said that ?E helped to increase coarser material (150-500 mm) by 3%, while reducing the fines by 1.1%. Furthermore, it was determined the ?E helped reduce the explosive load per meter of blast hole by 5%.