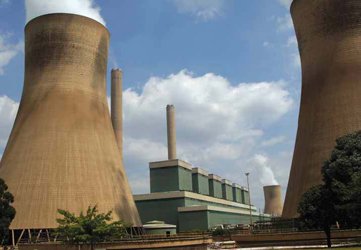 The Duvha coal-fired power plant in Witbank, South Africa, has six 600-MW units.
By Gavin du Venage, South African Editor
Some of the largest mining operations around South Africa have ground to a halt as the country once again undergoes rolling electricity blackouts. In late November, the countrys stateowned energy utility warned it could not guarantee electricity supplies, and began load shedding, taking parts of the national grid offline. In December, it implemented Stage 6 electricity cuts  about 6,000 megawatts (MW) of production shed, the first time ever in Eskoms history. Previous cuts had only gone to Stage 4 at maximum, or 4,000 MW.

Mining in particular is an energy intensive industry, especially in the gold and platinum regions in the north, where much of the activity takes place underground. Operations need to pump water to keep operations from flooding, as well as provide hoists to transport men and materials to and from work sites. Underground mines are far more seriously affected, said Alan Fine, spokesman for the Minerals Council of South Africa. In fact, for most mines, processing facilities will need to be curtailed quite substantially, if not totally.

Safety is compromised and few mines have the necessary backup generation capacity, since their power needs are close to those of a small city. Eskom, meanwhile, also appealed to energy intensive users to reduce operations. Petra Diamonds said it had halted operations at three of its mines  Cullinan, Finsch and Koffiefontein  in response to Eskoms request. Harmony Gold also announced it had suspended nightshift operations.

Anglo American Platinum, meanwhile, issued a shareholder notice ahead of a briefing to investors warning that production could be impacted by power outages. Sibanye-Stillwater, which operates some of South Africas oldest gold mines, also said it would cut production. Previously, mining companies have noted that electricity is one of their largest costs, making up to one-third of their operating expenses in South Africa. Eskom for its part is struggling with an aging fleet of coal plants that supply more than 90% of the countrys electricity.

Two mega coal stations in the northern part of the country are still partially complete after work began in 2010. Each plant will have a capacity of 4,800 MW and consume 15 million tons of coal annually. These were intended to replace the older coal plants mostly in the Mpumalanga province. Years of delay, however, mean older, increasingly unreliable coal stations are kept chugging along.

Apart from mining operations, the power cuts were also hurting other critical systems, said Minerals Council Chief Economist Henk Langenhoven. We have logistical problems like the unavailability of harbor and rail capacity, he noted. Crucially, smelters that produced ore had to be shut down or risk permanent damage if slag cooled and hardened in their crucibles. The smelters are the big users and the first to be asked to curtail consumption, Langenhoven said.

The government has said it wants to continue developing coal mines, as the country has around 50 billion tons in the ground, enough to last for the next two centuries at least, according to Mineral Council figures. The coal mining industry itself, however, is under pressure from the government to reduce prices at which it sells to Eskom. Public Enterprises Minister Pravin Gordhan, under whose aegis Eskom falls, told parliament in December talks had begun with producers.

We have got to lower the price of coal, Gordhan said. We are talking to coal suppliers to make sure they contribute; they have to share the burden. He said Eskom was returning to the practice of cost-plus mines, in which power plants rely on mines located next to them at preferential prices.

Under the administration of former President Jacob Zuma, Eskom had signed deals with politically connected businessmen in a corruption scandal now unfolding in a series of public hearings. These businessmen sold coal that required long distance haulage, often by road. In the meantime, the mining industry can expect little relief from power cuts in the foreseeable future. Eskom has warned that although it has a plan in place to refurbish older plants, for the next two years at least, companies must work load shedding into their planning.