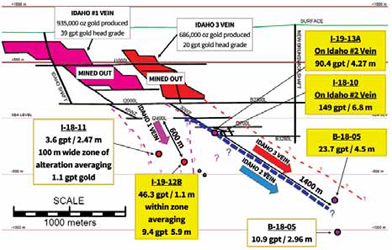 A long section shows the Idaho Veins system and drill highlights
Rise Gold Corp. has submitted an application to Nevada county, California, for a Use Permit to allow the reopening of the historic Idaho-Maryland gold mine. The mine is located in the Sierra Nevada mountains of northeast California. The Use Permit application proposes renewal of underground mining at an average rate of 1,000 short tons per day (st/d). The existing Brunswick shaft, which extends to about 3,400 ft below surface, would be used as the primary rock conveyance from the mine. A second service shaft would be constructed by raising from underground to provide for the conveyance of personnel, materials and equipment.

Gold processing would be done by gravity and flotation to produce gravity and flotation gold concentrates. Processing equipment and operations would be fully enclosed in modern buildings, and numerous mature trees located on the perimeter of the Brunswick site would be retained to provide visual shielding of above-ground project facilities and operations. Barren rock from underground tunneling and sand tailings would be used to create approximately 58 acres of level, industrial-zoned land for future economic development in Nevada county.

A water treatment plant and pond using conventional processes would ensure that groundwater pumped from the mine is treated to regulatory standards before being discharged to the local waterways. Approximately 300 employees would be required if the mine reaches full production. Rise Gold has completed 20,600 meters (m) of exploration core drilling at the Idaho-Maryland mine site. Numerous high-grade gold intercepts have been encountered, both near the existing mine workings and to depths significantly below historic mining areas. The company believes its drilling program has been successful, but cautions that no current mineral resources or mineral reserves have been defined.

The company has not completed a feasibility study and, therefore, has not demonstrated economic viability for redevelopment of the mine. Rise Gold is incorporated in the state of Nevada and maintains its head office in Vancouver, British Columbia, Canada.