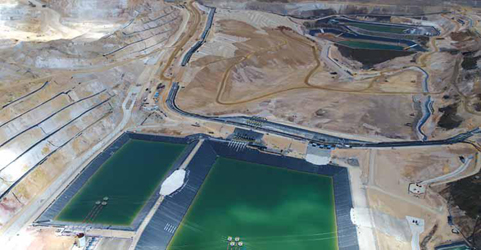 The leach pad and associated facilities are prepped at Quecher Main. (Photo: Newmont Goldcorp)
Newmont Goldcorps Quecher Main project at Yanacocha in Peru achieved commercial production safely, ahead of schedule and under budget, the company said. The full project, including future leach pad expansions, is expected to be completed for approximately $275 million, which is below the companys initial estimate.

Quecher Main extends the life of the Yanacocha operation to 2027, contributing average annual gold production of approximately 200,000 ounces (oz) from 2020 through 2024 at all-in sustaining costs between $900/oz and $1,000/oz. The project is expected to generate an internal rate of return of approximately 15% at a $1,200/oz gold price, according to Newmont Goldcorp.

Yanacocha began commercial production in 1993 and has since produced more than 38 million oz of gold from open-pit oxide and transitional ores processed at Yanacochas gold mill and leach pads. The operation is a joint venture between Newmont Goldcorp (51.35%), Minas Buenaventura (43.65%) and Sumitomo Corp. (5%).