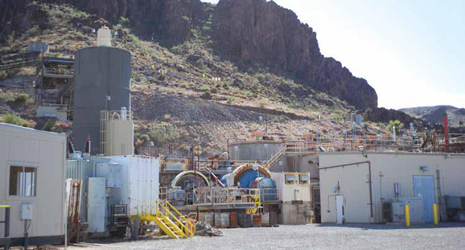 The Gold Road mill (above) in Arizona will increase from 227 mt/d to 454 mt/d by the end of the year.
(Photo: Para Resources)
Para Resources announced the successful start of the Gold Road mill and carbonin- leach (CIL) plant on October 23, with expected doré production to begin in early November. During an extended circuit test in the first quarter of 2019, the mill and plant operated as planned and achieved doré production at the benchmark gold recovery rate of 95%. Since the beginning of June when the new mine plan was put into effect, Gold Road has completed 245 feet of raise and incline to complete a new secondary escape route from the lowest levels of the mine, and more than 1,000 ft of development to create new production faces, including an extension of the existing decline to the 950 level.

As of October 20, run-of-mine stockpiles contained 5,100 metric tons (mt) at an average grade of 4.1 grams/mt Au. The mine is currently producing from five production faces, including stoping at the 100-level and two sublevels, the 3100E and 2900E, both of which have two headings, east and west. Both sub-levels are off of the new extension of the main decline.

We are very excited to have started production at the Gold Road plant, after a significant modification to the mine plan caused by a change in prior approvals from MSHA, President Ian Harris said. In addition to the major modification to the secondary escapeway, we decided to take advantage of the time to focus on advancing development. The work has set up the mine for sustainable production and pushed toward higher-grade areas. Mine production and grade continue to ramp-up quickly, and we are confident, based on our previous sustained testing, that the plant will operate at high availability and excellent recoveries.