Okumura Extends the Life of the Ube Isa Quarry 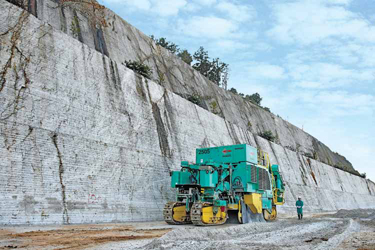 Using the remote control, the operator can easily operate the Wirtgen 2500 Vario Surface
Miner from outside the machine, making the mining process much safer with steep highwalls.
Limestone has been mined from the Ube Isa quarry in Yamaguchi, Japan, since 1948. What makes this mine special, however, is that it is located in the immediate vicinity of a residential area  the nearest home is only 150 meters away. Ube Industries, the owner of the quarry, recently hired Okumura Engineering Corp. to mine the limestone in a way that that would have the least impact on its neighbors. To achieve this, Okumura made the decision to use Wirtgen surface miners.

The densely populated area around the quarry is a challenge, because environmental effects such as vibration and noise for local residents limit the size of the work zone, said Tomoyuki Shodai, general manager of the mining department for Ube Industries. Due to the close proximity of the local residents, it has been impossible for the company to expand the open-cast mine any further in the past. Conventional blasting was simply not an option. As a result, the company was faced with the prospect of never being able to fully exploit the open-cast deposit, which would mean a total loss of several million tons of limestone for Ube Industries.

The Wirtgen surface miners, however, could be used to extract minerals without the use of explosives. By cutting the ground to mine the materials, they simplify the complex extraction and preparation process. Mining, crushing and depositing the material in windrows is all carried out in a single operation. In addition, the surface miners are perfect for mining raw materials under difficult geological conditions and in tight spaces, as is the case with the Ube Isa quarry. Ube had previously hired Okumura Engineering to mine the outer walls of the quarry in 2012.

The surface miners allow Okumura to create extremely stable and steep highwalls with narrow benches, thus safely expanding the mining area. As a result, the open-cast deposit can be fully exploited. Using Wirtgen surface miners allowed us to mine the southern side of the Maruyama region. That would have been impossible with conventional blasting methods, Shodai said. By now, the quarrys outer boundary wall have been gradually extended by 10 m in the direction of the residential area. While this seems like a small amount, this could increase the quarrys potential many times over.