Orion, Byrnecut to Collaborate on Prieska 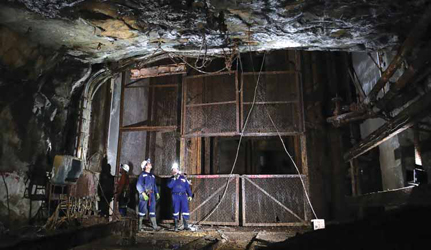 Engineers inspect the shaft bottom at the Preiska mine, which last operated during the 1990s.
(Photo: Orion Minerals)
Orion Minerals has signed an agreement with Byrnecut Offshore Pty Ltd. that envisions an alliance for underground mine development and production at the Prieska copper-zinc project in South Africas Northern Cape province. Ultimately operations at Prieska would involve mining and processing of 2.4 million metric tons per year (mt/y) of ore for 10 years, to sell approximately 21,000 mt/y of copper and 70,000 mt/y of zinc as differentiated concentrates.

Orion was granted mining rights for Prieska recently and this agreement paves the way for Byrnecut to bring the benefit of its experience to the project, which is intended as a global-best practice mechanized mining operation. Key terms of the agreement specify that Byrnecut will commit to promoting local employment and skills transfer in support of transformation of the industry and to collaborate with local black economic empowerment (BEE) enterprises.