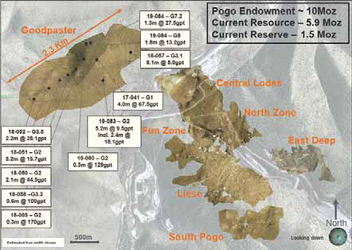 Northern Star Executive Chairman Bill Beament said the decision to increase Pogos production rate reflected the significant confidence the company has in its asset. The extensive changes we have implemented and our ongoing optimization program, including the introduction of longhole stoping and the use of bigger, more efficient mobile mining equipment, have been highly successful, Beament said.

Beament said Northern Stars confi- dence in the outlook for Pogo was also underpinned by the strong exploration results from the new discovery in the Goodpaster prospect located 1 kilometer (km) from the existing mining areas. The Goodpaster prospect is considered the continuation of the main Pogo mineralized trend. The initial drilling is focused approximately 1 km west of the Central Veins discovery area adjacent to the existing Pogo production areas.

The combination of the exploration success at Goodpaster and the effectiveness of the operational changes made in the mine leaves us in no doubt that investing in the plant expansion will generate strong returns for our shareholders and local stakeholders at Pogo, Beament said. In conjunction with the Central Veins discovery, permitting has been established to allow the development of initial underground access into the Central Veins and potentially the Goodpaster area for further exploration and predevelopment activities, according to the company.

We have owned Pogo for only a year and our exploration results already provide strong evidence that it is an emerging camp-scale system with huge potential to grow the inventory and mine life beyond the current 10-million-ounce endowment, Beament said.