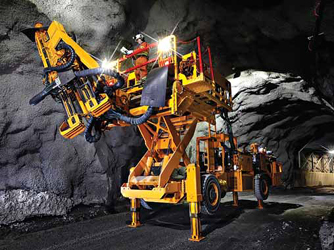 A miner maneuvers a boom into position on a battery-powered rig at the Borden
mine. (Photo: NewmontGoldcorp)
Newmont Goldcorp and dignitaries from across Ontario inaugurated the Borden Gold Project, which is being hailed as mine of the future. The Borden mine, located near Chapleau, Ontario, features state-of-the-art health and safety controls, digital mining technologies and processes, and low-carbon energy vehicles  all anchored in a mutually beneficial partnership with local communities, according to the company. Borden is expected to achieve commercial production in the fourth quarter.

Ore from Borden is processed at the existing mill at the companys Porcupine operation in Timmins, 180 kilometers (km) to the east. Borden is fully permitted for operation, and partnership agreements have been signed with local First Nations. At 1,000 km2, Bordens land package represents additional exploration upside as the Borden deposit remains open at depth.

The Canadian and Ontario governments each granted CAD$5 million toward electrification of the mine.