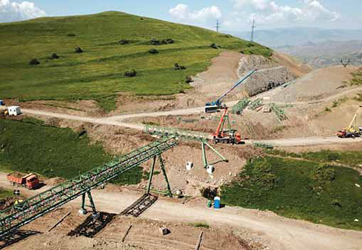 An investigative committee finds no grounds for criminal prosecution against Lydians
Amulsar project, which will now allow the company to recover and rebuild its capacity
at the operation. (Photo: Lydian)
An investigative committee in Armenia has found there is no criminal case against Lydian International Ltd. and its Amulsar project after the results of an environmental audit were released. The Special Investigative Committee (SIC) of the Republic of Armenia released the report, provided to them on August 7, on the environmental audit conducted by Earth Link & Advanced Resources Development on the Amulsar project.

Yura Ivanyan, head of the Department for Investigation of Corruption-related Property Crimes and Cybercrimes of the SIC, said they analyzed the information and findings provided by the international audit report and found that there are no grounds for criminal prosecution and continuation of criminal proceedings. Lydians Amulsar project has been subject to three full-scale environmental audits since July 2018.

Interim President and CEO of Lydian Edward Sellers said, We are relieved that the audit report has been made public, as the government of Armenia has repeatedly conditioned Lydians ability to advance the Amulsar project on its results. He added that he was confident the full report would confirm Lydians prudential approach to environmental stewardship.

Lydian said it operates in Armenia in accordance with its mining permits, which were granted based on a comprehensive Environmental Impact Assessment approval process.