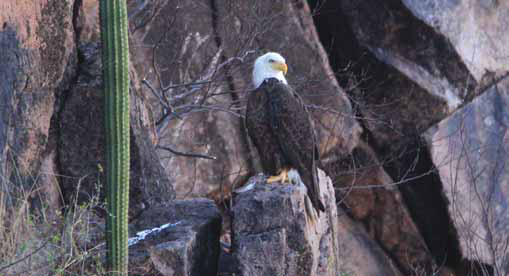 Mexico has less than 20 bald eagles, far fewer than Canada (40,000) and the United States (5,000).
Agnico Eagle has once again partnered with the governments of Mexico and the United States to protect the endangered bald eagle  an emblem of Agnico Eagle Mines Ltd. (AEM). Agnico Eagle Mexico began working with the Commission of Ecology and Sustainable Development of the state of Sonora (CEDES), Mexico, in 2017 to monitor and study the population of this majestic species, which has historically nested in the nearby Yaqui River Lake System. In addition to Agnico Eagle and CEDES, project supporters include the Arizona Game and Fish Department (AZGFD) and the U.S. Fish and Wildlife Service (USFWS).

Known as Americas national bird, the range of this powerful flyer includes most of Canada, the contiguous United States and northern Mexico. Last seen in Mexico 19 years ago, the bald eagle  known there as Aguila Calva  is considered to be in danger of extinction in the country. The project team worked collaboratively to track the birds, with experts from AZGFD and USFWS training CEDES technical and scientific personnel on how to observe and evaluate bald eagle nests. Field trips to Sahuaripa and Soyopa in the Sierra of the state of Senora resulted in sightings of two pairs of bald eagles in the study area during 2018. One of the pairs was accompanied by an eaglet chick about two weeks old.

CEDES expects to conclude its research study this July and will then present the project partners with a formal report on its research results. Going forward, CEDES hopes to extend its monitoring program to other regions of the hydrological basin of the Yaqui River.

Not only does this project make sense for Agnico Eagle because of our heritage and culture, it also speaks to the value we place on stewarding and protecting the native wildlife and biodiversity in the mountains and towns that surround our operations, said Gildardo Montenegro, manager of administration, community development and environment, Agnico Eagle Mexico at the La India mine. The results to date have been very encouraging and we will consider providing further support to promote the recovery of this great species in the state of Sonora and in Mexico.